Margarita Vineyard’s most spectacular soil profile is found along a section that we call Oyster Ridge, where the ground is riddled with petrified oyster shells that testify to the land’s origins as an uplifted sea bed.

These fossils create the type of calcium-rich soil that is coveted by winemakers worldwide, and Wine & Spirits Magazine went so far as to call Oyster Ridge “perhaps the most dramatically calcareous chunk of earth in California.”

Margarita Vineyard today stands 14 miles from the Pacific Ocean, at the foot of the Santa Lucia Mountain Range on top of the towering Cuesta Grade. Ancient sea life is located all the way up here? Yes, it’s true—and so one can only marvel at the tectonic and glacial forces that have made this possible over the past six million years.

Oysters aren’t the only sea fossils found on the ranch. Scallops, sand dollars, shark teeth and whale bones are all part of the mix as well. Eons ago, a bank of shallow sea water became geologically trapped, preserved and ultimately pushed inland—taking these fossilized creatures with it.

Ancient sea bed soils are found at different points on the ranch where the substrate has become folded, revealing veins of fossilized soils. But Oyster Ridge is where the sea bed is abundantly and spectacularly exposed. “There’s a formation of Monterey shale underneath Oyster Ridge that is acting like a slip fault underneath the ancient sea bed, lifting it straight up,” says Ancient Peaks co-owner Karl Wittstrom. “There’s a lot of complicated geology on the ranch behind this phenomenon, including a nearby glacial deposit.”

Karl says that there are other areas in Paso Robles where you can find veins of sea bed soils, “but it’s really rare to have this type of concentration near the surface.” 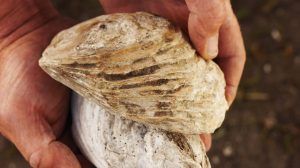 At Oyster Ridge, the beds of compressed sea shells spill out of the ground as a powdery soil riddled with whole fossils. This isn’t the limestone most often associated with calcareous soils, but the effect is similar: a high concentration of calcium content, creating the type of calcareous soils that are coveted by winemakers worldwide.

In fact, the high calcium content in our sea bed soils acts like an amped-up form of limestone, yielding wines with high-toned flavors, pretty aromatics and fine tannins. Cabernet Sauvignon and Merlot are among the varieties that excel here, and we make a Bordeaux-style blend called Oyster Ridge that pays tribute to this soil.

Each year, we craft the limited-edition Oyster Ridge cuvée to exemplify our finest winemaking efforts. The new release 2019 vintage is a blend of Cabernet Sauvignon (72%), Cabernet Franc (11%), Petit Verdot (9%), Merlot (6%) and Malbec (2%), all from meticulously farmed vineyard blocks cultivated for the Oyster Ridge program. Come by our tasting room to try Oyster Ridge for yourself, and to see some of our most impressive fossil finds for yourself. You may also purchase Oyster Ridge and other wines from our web store.