Brenda has been with our winery since the very beginning, dating back to 2006. She spends her working days in the winery lab, developing crucial data on our wines and making sure that everything is perfect prior to bottling. 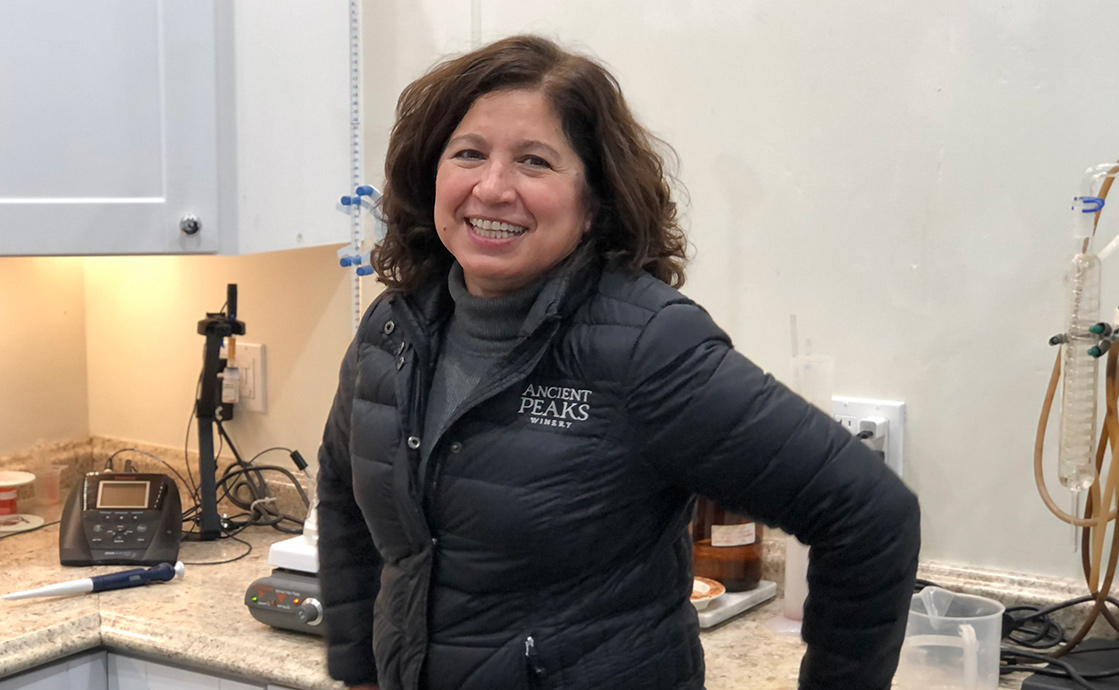 Brenda grew up in a small town called Tecuala, located in the state of Nayarit on the west coast of Mexico. After graduating college in the city of Culiacan with a degree in psychology, she returned to Tecuala and served as a student counselor at the same high school she had attended as a teenager.

By the mid 2000s, Brenda’s husband Fernando was living full time in California, and Brenda would split her time between the United States and Mexico. It just so happened that her husband worked and lived on the ranch where the Calf Canyon winery facility was located—and where the Filipponi, Rossi and Wittstrom families first started making their wines for Ancient Peaks.

“My husband got to know Doug (Filipponi) and Karl (Wittstrom), and he said they might have a winery job for me,” Brenda recalls. “At first I said, ‘No, thank you,’ but I came around to the idea. It gave me the opportunity to be with my husband year round and to try something new.”

Brenda started in the cellar in 2006, but within three months she was recruited into light lab duty. Two years later, she was running the lab by herself. “I remember Karl and Doug brought so much emotion and excitement when starting their winery, and it’s still that way,” she says.

Something Different Every Day

Today, Brenda works out of the Ancient Peaks winery facility in Paso Robles. She and her husband have two sons; their youngest attends Cuesta College, the oldest graduated from UC Santa Cruz. In her spare time, Brenda enjoys watching movies and tending to her 26-bed vegetable garden. “It brings me great satisfaction, especially when I get a good harvest,” she says. “I love sharing my veggies with others.”

Brenda enjoys the interpersonal aspects of her job at Ancient Peaks, and she takes joy in watching the newer cellar workers—some of whom also come from Mexico—grow in their jobs. “Working here, you see the passion, integrity and efforts of our leadership, and that trickles down. My co-workers are all great at their jobs and they are good examples to follow. I’m very proud of them.”

After all these years, Brenda’s enthusiasm for her work still remains high. “To this day, it’s never boring, it’s very dynamic,” she says. “Every day brings something different. One day, I’m out in the barrel cellar, the other day I’m working around tanks. Then it’s back in the lab, running tests, checking on malolactic fermentations, everything. I have the liberty to just do my work, and I love it.”