We believe that the wild inhabitants of Santa Margarita Ranch contribute to the soul of our wines.

Indeed, when we talk about terroir and sustainability, we believe that both are inseparable from the natural wildlife that call our ranch home. And when these animals are happy and healthy and abundant, it means that we are doing our job and participating in something much bigger than us—which can only make our wines more soulful.

Deer, boar, bears and bobcats are just some of the amazing creatures that live around and among our vines. And we can’t forget about the most majestic of them all—the bald eagle.

Follow along as we witness the creation of one young eagle family from winter through summer of this year. It’ll put a wild new spin on your enjoyment of Ancient Peaks wines! 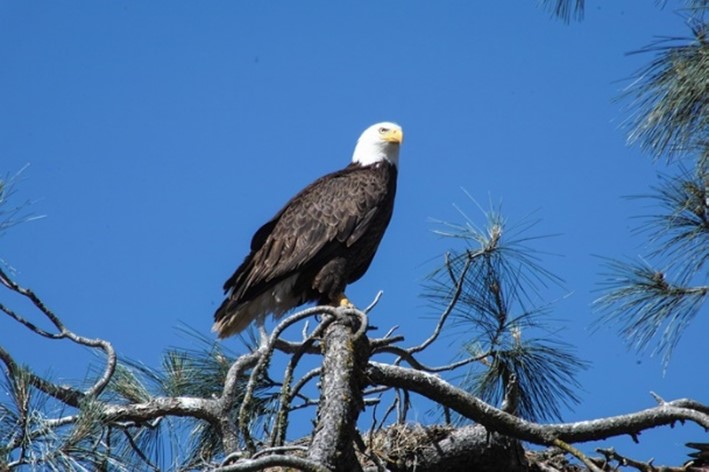 In February, vineyard and ranch employee Jody Langford began following and photographing one of our bald eagle nests high atop a pine tree. The nest was tended by two adult eagles—a male and a female. “It was spectacular watching them soar together,” Jody says.

By late February, the female was spending considerable time at home, warming her eggs. One time, Jody watched the female chase off a red-tail hawk that ventured too close to the nest. Based on his observations, Jody believes that the eggs hatched in early March.

The month of March was all about nurturing the newborns. “While the male soared overhead, the female tended to the still unseen eaglets,” Jody says. “It was interesting how the pair of adults was rarely together on the same tree. One would be at the nest and the other would be circling above or perched on a nearby gray pine.” 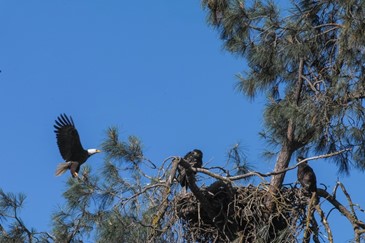 The eaglets became visible in mid April—and they quickly became quite large! “At times, it seemed as if the mother was holding class,” Jody says. “The eaglets perched attentively on the nest and the mother seemingly instructing them in something pertaining to their everyday life. The eaglets never seemed to take their eyes off of their mother, watching her every move.”

In early June, the eaglets became more active, venturing from the friendly confines of the nest to the nest edge and nearby branches. The adult eagles were usually nearby, watching as the eaglets tested their bravery. 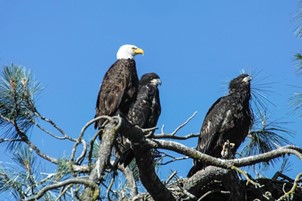 Finally, on the evening of June 18, one of the eaglets took off on its maiden voyage. It had already made many short test flights between nearby branches and the nest. “They were more like hops than actual flights,” Jody says. He adds, “Then, less than a week later, around June 24, both adult eagles were present at the empty nest with the young ones out exploring their new world.”

We are proud to live and work amid the wild beauty of San Luis Obispo County, and to share the land with these incredible animals. The next time you enjoy a glass of sustainably grown Ancient Peaks wine, give a toast to these young eagles who are now soaring over our vines.

Our thanks go out to Jody for documenting this incredible wildlife journey, which, in his words, required no small amount of “human patience.” But we also know that it was a labor of love!