Paso Robles kept its cool this spring, setting us up for what might be a later-than-usual harvest season this fall.

Indeed, cool, breezy conditions persisted across the region into mid May. Temperatures even plunged to 30 degrees in the early morning of May 12 at our estate Margarita Vineyard. This resulted in a later bud break, and now a later flowering period—all of which points to a later harvest season.

As of this writing, we’re expecting flowering to begin shortly, starting with our Pinot Noir blocks—a full two to three weeks behind the typical timing.

Flowering, or bloom, is the process whereby the baby clusters self-pollinate to set the coming crop. It’s a crucial stage that benefits from steady weather. Unusually cold, hot or windy conditions can disrupt the pollination and result in “shatter,” which creates clusters with missing grapes and lower yields.

The one positive of the later bloom this year is that it comes at a time when the cool, windy conditions of spring give way to the mildly warm weather of early June. Therefore, we expect a solid bloom in the weeks ahead.

“Timing-wise, we’re behind the norm right now,” says co-owner and viticulturist Doug Filipponi. “Patience is the rule so far this year.” 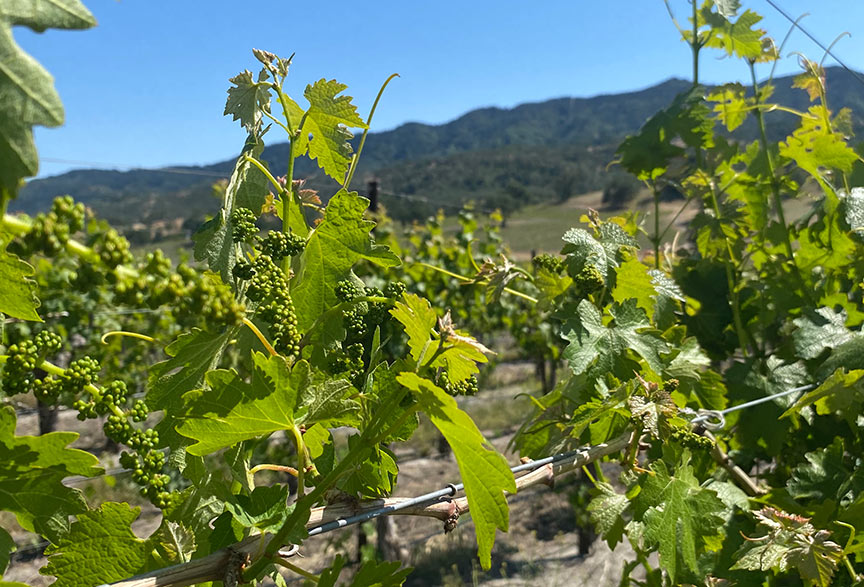 Since Margarita Vineyard occupies the coolest growing area in Paso Robles, our fruit always ripens on the later side. Now, with the late bud break and bloom this spring, we may be looking at something even later than normal.

Doug, however, remains unphased. “We can pick all the way through mid November with no problem, as long as we don’t get an early winter,” he says. “It’s what makes our fruit and wines so distinctive—this long growing season that allows for ripe flavors while preserving acidity and structure. It’s the hallmark of Ancient Peaks wines.”