While we are less than two months into the new year, we are already thinking ahead to the 2021 harvest to come.

The year started off dry, with a warm spell in mid January that gave us all a too-early taste of spring fever. That all changed on January 26, with the arrival of an “atmospheric river” along the California coast, with high winds, cold temperatures and an incredible amount of rainfall over a span of three days. Here on Santa Margarita Ranch, we recorded up to eight inches of rain over a 48-hour period.

This much-needed rainfall helped flush the soils and replenish the aquifer, while the cooler temperatures helped keep the vines happy in their slumber. At this rate, we now expect bud break to begin with our white varieties in mid March, which is typical for Margarita Vineyard. Pinot Noir will follow later in the month, with the bulk of our reds undergoing bud break in April. 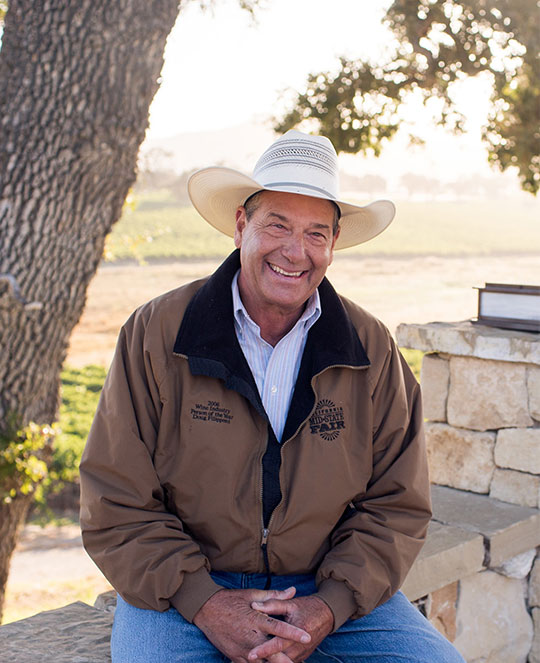 “At this stage, we don’t want super-low morning temperatures in the ‘teens,” says co-owner and viticulturist Doug Filipponi (pictured here). “This could cause damage to the buds. On the other hand , if we get consistent morning temperatures above 40 degrees, the plants get crazy and start to wake up early. Steady cold is what allows us to enjoy bud break right on time.”

Meanwhile, as of this writing, we are 90% finished with pruning, which is always a welcome milestone. Cover crops are also taking root in the vineyard, providing nitrogen and other nutrients to the root zones. In some places, our cover crops consist simply of native grasses that are allowed to grow—these grasses are particularly helpful for fostering beneficial insect populations.

Once the buds begin to swell and break open in March, we will enter into the “frost season,” whereby we must be vigilant in protecting the buds and new growth from freezing temperatures. We have vineyard alarms that alert us when temperatures in a given block begin reaching 35 degrees. At that point, we take action—either by activating wind machines or turning on pulse emitters that coat the new growth with water that turns into protective ice. Frost season is always unpredictable and can continue well into May.

We are increasingly relying on wind machines as a more sustainable way to mitigate frost while conserving water. Each year, we add two or three more fixed wind machines to Margarita Vineyard.

“We start with mobile wind machines,” Doug says. “We move them around as needed, and once we confirm where they are effective, we establish a permanent machine in that spot.”

We have many months until harvest, but it always seems to come fast because the activity in the vineyard never stops. It is always impossible to predict what Mother Nature might do next, but so far she has us off to a solid start in 2021.